Today, on the occasion of International Women Human Rights Defenders Day, WILPF sheds light on Berta Cáceres’  fight for the protection of the environment and Indigenous peoples’ rights.

Feminist, Lenca Indigenous and environmental leader, Berta Isabel Cáceres Flores became an influential and renowned human rights defender through her commitment to peace, justice and human rights. She inspired many by her fearless fight against the activities of hydroelectric, extractive and mining companies in Honduras. Berta Cáceres dedicated her life to the protection of Indigenous communities and the environment. In 1993, she founded the Consejo Cívico de Organizaciones Populares e Indígenas de Honduras (COPINH) – the Civic Council of Popular and Indigenous Organisations of Honduras. The organisation aims at improving the livelihoods of local communities and at supporting them in regaining control over their lands. Her leadership enabled Berta Cáceres to coordinate collective action and peaceful resistance in order to protect natural resources from being encroached upon by private companies. Recognised internationally, Berta Cáceres was awarded with a Goldman Environmental Prize in 2015 for her important and valued community work.

On 2 March 2016, Berta Cáceres was assassinated by a group of armed men in her hometown, La Esperanza, in Honduras. Berta’s assassination occurred at a time when she tried to halt the development of the hydroelectric dam, Agua Zarca, on the  Gualcarque river, in Honduras. The dam project, created in 2008, was owned by the Honduran private energy company Desarrollos Energéticos SA (DESA). Despite the local communities’ resistance and peaceful protests, DESA continued the development of its activities without carrying out the required community consultation. Over the years, many opponents of the project received death threats, including members of COPINH and Berta Cáceres. The project could have had disastrous environmental impacts as it threatened to drain the river, located in Lenca territories, which is highly valued and regarded as sacred by the local communities. Following Berta Caceres’ death and the international outcry that it has generated, several international funders have withdrawn from the project. In July 2018, the project was suspended[1].

The implementation of the Agua Zarca and its long-term consequences on the life of local communities and their environment was not an isolated case. The territories of Indigenous, Afro-Honduran and campesinos communities in Honduras are of great interest for local and transnational corporations. For instance, companies from Canada, the U.S. and Europe operate large-scale projects in their , from which they extract and produce silver, zinc, iron, lead and other minerals. It is estimated that over 30% of the Honduran territory are concessions to private transnational mining and hydroelectric companies.[2] Frequently, companies implement their activities in their territories without the free, prior and informed consent of communities as established by the Article 6 of the 169 Convention of the International Labour Organisation (ILO), ratified by Honduras on 28th of March 1995”.[3] In some cases, according to the Guardian,  “companies have been known to forge signatures on consent documents ”.[4]

Impunity and militarised extractivism must end

The Honduran government has authorised such investments by companies in particular after the 2009 coup d’état organised by militaries to remove former president Manuel Zelaya.  The coup, which made way to the right wing Honduran government, led to a heavy period of police and military repression. The situation has led to a high degree of violence, widespread corruption, organised crimes and militarisation. Furthermore, since 2009, the government has based its economic model on the extraction of natural resources.[5] Therefore, it has massively promoted investment and has prioritised economic gains over the protection of environmental laws and the fulfilment of human rights. It has also privatised land, rivers and uprooting communities and approved the construction of hundreds of mining and extractive projects across the country. In order to satisfy the large demand for energy from these companies to execute their operations, the government has granted dozens of hydroelectric dam concessions. [6]

Extractive, mining and hydroelectric projects generate gross environmental and health impacts. Local communities are likely to suffer from displacement, intimidation and abuses, in particular social leaders and human rights defenders who are regularly targeted in the context of land-related conflicts.[7] According to a recent report released by Global Witness, some companies “are suspected of ordering attacks by private security guards, police, army and hit men with the aim of silencing those who speak out”.[8] It also affirms “through their inaction, and sometimes their active involvement, the Honduran authorities are complicit in the attacks against land and environmental defenders.” [9] 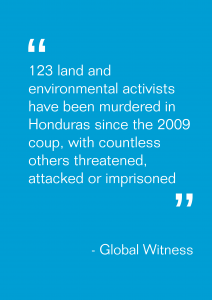 Honduras is among the countries with the highest rate of murder of environmental activists. According to Global Witness, “123 land and environmental activists have been murdered in Honduras since the 2009 coup, with countless others threatened, attacked or imprisoned”. [10] The violence exercised against them is systematic and includes death threats, harassment, persecution, criminalisation, kidnapping and disappearance. Honduras has also the highest rate of impunity. Impunity rate reaches almost 95% for cases of killings.[11]

With regards to Berta Cáceres’ case, over two years after her death, her family and the COPINH are still seeking justice. On 17 of September of this year, the trial started in Tegucigalpa, Honduras. Eight men are accused of participating in the murder of Berta Cáceres, all “ranging from mid-level DESA employees to high ranked active military officers to hit men”.[12] The trial has been suspended twice, in September and in October. During the trial, international organisations have observed several irregularities, including the lack of fairness, transparency and access for the victims’ side to key information and pieces of evidence. [13] Relatives of Berta Cáceres described the trial as “a farce” that will reinforce the impunity and let free those responsible for Berta Cáceres murder.[14]

Despite her death, Berta Cáceres left a legacy. “Berta did not die, she multiplied” is often said within local communities in Honduras.  Indeed, her fight, speeches, achievements and activism keep inspiring the Lenca communities, Indigenous peoples and environmental defenders from Honduras and Latin America. She sent them a message of hope and strength to protect and defend their land, water and human rights.

To learn more about Berta Cáceres, read WILPF open letter regarding her murder and her portrait in the WILPF Women for Peace storytelling initiative.