Women on Waves: Sailing out to Secure Women’s Rights

Women on Waves: Sailing out to Secure Women’s Rights

Women’s rights and women’s bodies are a battleground in politics around the world. The right to abortion is something that is constantly challenged, even in Western countries where this right has been a given for so many years. Increasing power to conservatives and pro-life groups all over the world jeopardises women’s health and safety. In the documentary “Vessel”, we follow the organisation Women on Waves, who works tirelessly to secure access to safe abortions for all women. It is a strong and moving documentary that reminds us why activism matters.

In the first scene of “Vessel”, we are thrown right into the middle of an anti-abortion demonstration in Morocco. The agitated crowd mainly consists of men. They yell that having an abortion is a betrayal against God. Thereby the scene is set and the viewer becomes aware of some of the challenges you face, when you work for securing women’s right to abortion.

Surrounded by the angry crowd stands Rebecca Gomperts, the founder of Women on Waves, a Dutch organisation dedicated to give women all over the world access to safe abortions. Her cheeks are a little red, but other than that she has a determined look on her face and radiates strength and empowerment. It is clearly not the first time she is confronted with a crowd of angry men.

Rebecca Gomperts has her facts straight. She knows exactly what she is doing. She knows the laws on the topic and knows how to maneuver in a hostile environment, where many see her mission as a project of the anti-Christ. She started Women on Waves because she believes that every woman has the right to control her own body. The project is about reducing suffering. If you don’t feel you will be a good parent, it will create suffering. Both for the woman forced to have the child and for the child she is forced to have.

Since abortion is illegal in many countries around the world, Gomperts had to come up with an idea on how to work around restrictive national laws.

“How could we create a space where the only permission a woman needs is her own?” she asks in the film. 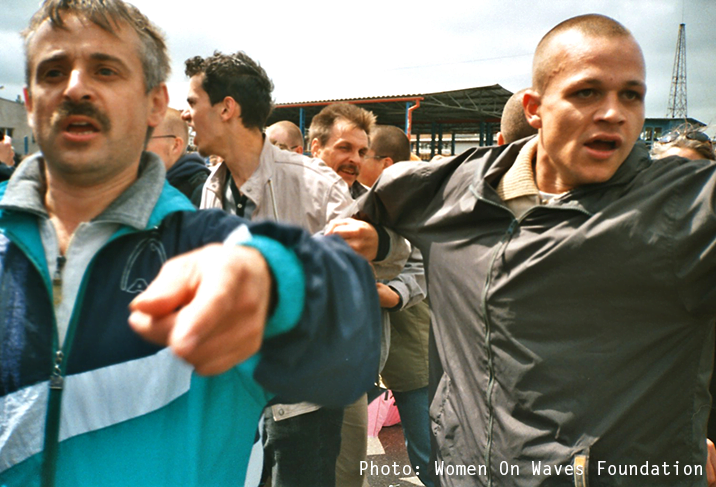 The power of information

While some politicians seem to think that criminalising abortions mean that women stop having them, this is not the case. Women get abortions even when it is illegal. But instead of safe abortions they have to go underground and often end up in dangerous situations where their health is jeopardised.

Women on Waves is an activist attempt to fight for women’s rights. Since the medication (misoprostol) used for abortions is actually accessible in pharmacies in most countries, the organisation started distributing knowledge on how to take the medication in case of pregnancy and how to buy it in the pharmacies without attracting suspicion.

As Gompert says: “You cannot stop women from accessing something they have the right to.”

The organisation therefore created Women on Web, an online pendant to Women on Waves. Here women can contact them with questions about being pregnant, and it is a platform where women can share fear, loneliness and worries. It is also a platform where information is shared about relevant medication and how to have safe abortions, even if your country prohibits it.

Standing up for women’s rights

The last six months have shown us that achievements within the field of women’s rights should never be taken for granted. The Polish government’s attempt in October 2016 to make a total ban on abortions resulted in massive protests all over Poland on what became known as Black Monday. The protests worked and the conservative government had to withdraw the suggested law, but Polish women still have very limited access to abortion. And the discussion on whether abortion in all circumstances should be criminalised is still ongoing.

The reimposition of the so-called ‘global gag rule’ by the Trump administration in the US is another example on how women’s rights are being kept hostage in a political landscape more and more controlled by right-wing values. Trump’s Global Gag Rule ensures that all non-US NGOs who receive funding from US family planning are prohibited from informing or educating people on safe abortions. Advising on safe abortion will mean the withdrawal of all US funding. This is a serious political statement that has consequences for women all over the world.

It is when political decisions like the one in Poland and the Global Gag Rule are imposed, that organisations like Women on Waves become essential. Standing up for women´s rights is a never-ending job that acquires we keep our eyes open and are aware of the political loops and tricks being made that slowly try to limit or abolish women’s rights. Women’s organisations are more important than ever. Raising our voices to say no to injustice is more important than ever. “Vessel” shows us that when women work together, they can change society.

Comment below if you know any documentaries about women’s rights.