#WomenPeaceKorea – Women Must Be At The Peace Table To Resolve Conflicts

#WomenPeaceKorea – Women Must Be At The Peace Table To Resolve Conflicts

Research shows that of 182 signed peace accords, an agreement was reached when women’s groups influenced the peace process in ALL but one case.

Women must be at the peace table to resolve conflicts!

That is why today, WILPF International President, Kozue Akibayashi, will join a coalition of distinguished women representing feminist peace movements from across the globe and will push to be included in the Foreign Ministers Meeting on Security and Stability in the Korean Peninsula. The Foreign Ministers Meeting is jointly hosted by Canada and the United States in Vancouver on January 16, 2018. The coalition has delivered a letter signed by WILPF and 216 civil society organizations from 47 countries to the Foreign Ministers invited to attend the Vancouver meetings, asking that women’s movements have a seat at the peace table.

The objective of the women’s peace delegation is to urge the Foreign Ministers to prepare the table for a diplomatic peace process that moves away from war and increased militarization, and towards peace, reconciliation, and genuine security. Through the Vancouver Women’s Forum and other actions, the women delegates will remind government leaders of overwhelming global public opinion that favours a peaceful diplomatic resolution as the only option on the table for resolving the Korean crisis and that working with women’s movements is essential for lasting diplomatic solutions.

Given the recent breakthrough on inter-Korean dialogue, the delegates will encourage government officials to support the peace process in Korea, not derail it.

Join the Thunderclap to send your own message of peace and solidarity, and urge the Foreign Ministers to include women in the talks—and find a peaceful solution for the Korean Peninsula!
You can also amplify the message on social media with the hashtag #WomenPeaceKorea and the below graphic: 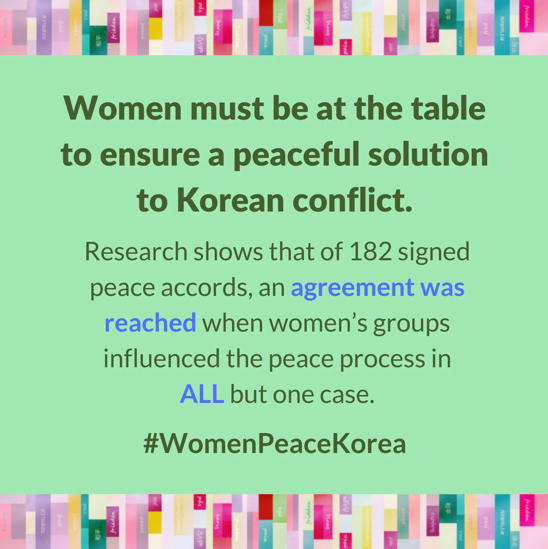 To read more about this initiative, check the Women Cross DMZ website.