The UN General Assembly First Committee on Disarmament and International Security is underway in New York, and today is the final day of the general debate. Thematic debates start on Thursday 13 October and are scheduled to continue until 2 November.

This year marks a significant move forward in the discussion on the prohibition of nuclear weapons. WILPF’s disarmament programme, Reaching Critical Will, is covering the discussions with weekly reports in their ‘First Committee Monitor‘.

“It is in the nature of beginning that something new is started which cannot be expected from whatever may have happened before. This character of startling unexpectedness is inherent in all beginnings and in all origins… The new always happens against the overwhelming odds of statistical laws and their probability, which for all practical, everyday purposes amounts to certainty; the new therefore always appears in the guise of a miracle.” – Hannah Arendt

In October in New York, you can feel the seasons changing. Outside of the UN building, the leaves are changing colour, the air is getting cooler, and there is a fresh briskness in the wind.

This year, we’ll also be able to feel changes inside the conference room. But rather than being based on the tilt of the Earth’s axis of rotation relative to its orbital plane, these changes are coming from a revolution in the international community’s approach to nuclear weapons.

71 years after the creation of the most destructive weapon ever and 46 years after the entry into force of the Non-Proliferation Treaty’s obligations for nuclear disarmament, the majority of states are finally throwing off the shackles of nuclear injustice and violence. After decades of demanding, pleading, and cajoling the self-described “nuclear powers” to abide by their legal obligations to eliminate their arsenals, committed states are now poised to take action.

It has been less than two ears since Austria introduced the Humanitarian Pledge, which 127 states have endorsed, committing themselves to efforts to stigmatise, prohibit, and eliminate nuclear weapons. For the majority of these states, “filling the legal gap for the prohibition and elimination of nuclear weapons” means commencing negotiations in 2017 for a legally binding instrument to prohibit nuclear weapons.

This is a sea change. It is transformative. It is long-fought and hard-won and it is certainly not over. It is a piece of the path of a long road of activism, sacrifice, and courage from people the world over for decades. It is an important piece, a critical node, and it will require more courage – from governments as much as from activists – to carry forward successfully.

This rejection of injustice, and of a shocking capacity and willingness of massive violence, should set the tone for all First Committee and our work beyond these corridors.

As we gather to meet in New York, Yemenis and Syrians continue to die from airstrikes in populated areas, with bombs hitting hospitals and homes. Corporations in the United Kingdom and the United States, amongst others, continue to rake in profits from the bombing of Yemen, with the UK government even being bumped up to the position of second largest arms dealer in the world. The gathering of Arms Trade Treaty states parties in August proved totally inadequate to address these challenges. 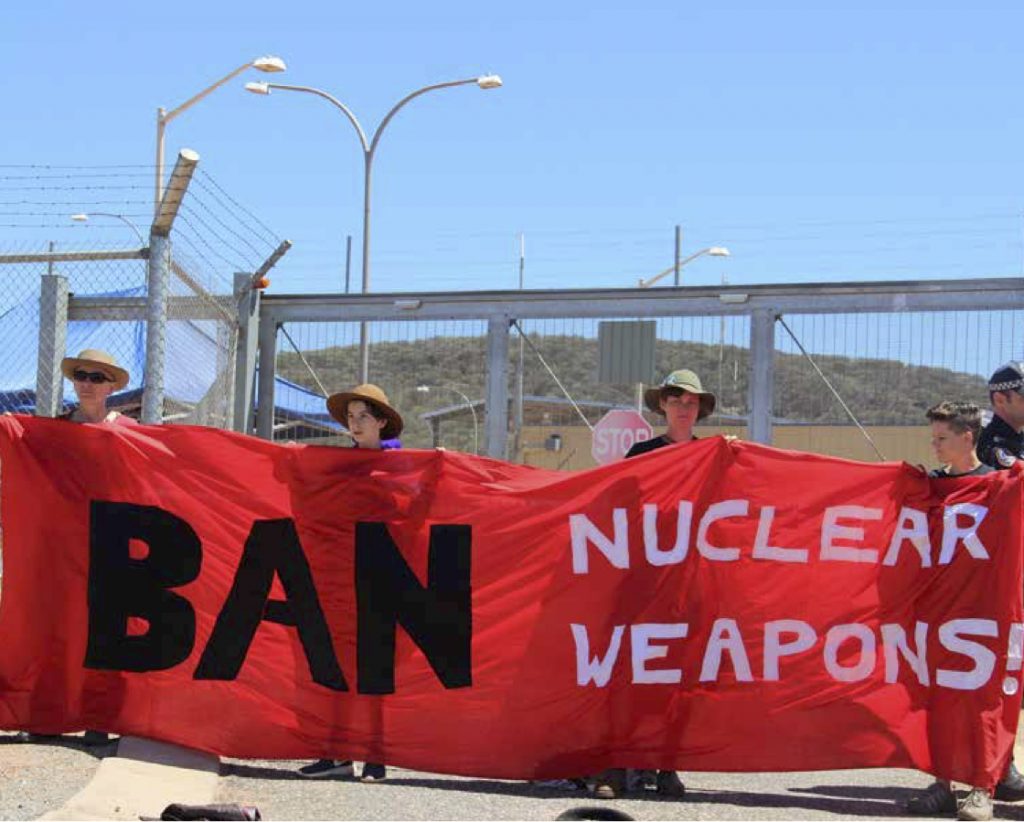 Protest at Alice Springs, Australia, as part of #ClosePineGap 2016.

But this is not the end of the story. In addition to the overwhelming support for the start of negotiations to prohibit nuclear weapons, other positive developments are underway. Civil society and parliamentarians are challenging arms transfers from the UK and the US to Saudi Arabia. States are coming together to talk about how to end the use of explosive weapons in populated areas. There is mounting opposition to US military bases from Okinawa to Alice Springs to Diego Garcia. Colombia and the FARC reached a peace and disarmament agreement.

These are movements forward we must embrace. Peace and justice will grow from the ashes of violence if we continue to oppose militarism, patriarchy, racism, and economic injustice and develop alternatives that put people first. First Committee, in bringing together states, international organisations, and civil society to talk about a fairly comprehensive range of disarmament and international security issues, is an opportunity to discuss and advance those alternatives.

Last month, the antinuclear movement lost one of its great champions. Dr. Bill Williams, Chair of ICAN in Australia, passed away in his sleep one night, leaving a loving family and a legacy of activism, love, and passion. He once wrote, “After the energetically anti-nuke eighties and the end of the Cold War, nuclear holocaust – always unthinkable – became almost unmentionable. A mass self-censorship, a mental no-fly zone, a cone of silence descended. Little wonder: no sane person wants to contaminate their dreams with this ultimate horror. But to finish this journey of survival – to abolition – we need to penetrate the fog of fear and denial, informing ourselves and our neighbours without inducing psychological paralysis.”

In a tribute to Bill in the Australian parliament, Senator Scott Ludlam proclaimed that this – the overcoming of fear and denial – is happening: “From Torquay to the First Committee of the United Nations General Assembly, to the Western Australian Goldfields, somehow, it is happening.”

The world is watching. For those that think what happens in the walls of this conference room doesn’t matter or isn’t known, think again. Expectations are high. Every person here has the chance to be on the right side of history and help set a course for a safer, more peaceful, and more just future for us all.

For further reading, Reaching Critical Will also publishes its ‘First Committee Briefing Book’ ahead of the UN General Assembly First Committee each year. This briefing book highlights a number of critical disarmament topics and suggests how governments can achieve progress.

Download the ‘First Committee Briefing Book 2016’ by Reaching Critical Will.