In the context of the UN talks on Syria, this article aims to bring to light particular characteristics of Syrian women’s grassroots organisations that form crucial actors for change on the ground, but are far too often marginalised from negotiations and the peace process in general. The below information is primarily based on findings included in a study on women peace activism in Syria conducted by Badael, a Syrian non-governmental organisation, entitled Peacebuilding defines our future now (2015).

1) Women’s peace activism efforts in Syria come in all shapes and forms. While women groups constitute the primary actor carrying out the peace activism work on the ground, numerous activities and efforts are being conducted by individual women activists inside Syria. Women’s peacebuilding efforts and activities are undertaken in areas controlled by all warring parties to the conflict, and cover a wide array of issues that include, but are not limited to:

Types of peacebuilding activities by region in Syria. For a larger version, click on the photo and scroll to page 22-23. Credit: Badael Foundation.

In addition, peacebuilding activities carried out by individual women activists mainly revolved around negotiations on the ground (either with militants to protect civilians, or between two militant groups), mediation efforts to release detainees, revenge-deterring mechanisms to prevent potential violence, and even combating the proliferation of small arms. Examining the geographical distribution of these diverse forms of peace activism reflects how women’s efforts were not spontaneous or uncoordinated – rather, they were carefully tailored to respond to the needs identified in the respective communities.

2) Contrary to popular belief, ISIL is not the main or sole threat to women’s activism on the ground. While most of civil society organisations established in now ISIL-controlled areas have vanished after the latter took power, some women groups are still pursuing their activities but in absolute secrecy and with different frameworks than those previously adopted. In addition, women activists in ISIL-controlled areas face severe restrictions in dress codes and movements, and can even face public beheadings for their activism work. However, ISIL does not constitute the primary or only danger to women in general and activists in specific. In reality, the Assad regime is responsible for 94% of the toll of women killed since the outbreak of the revolution in 2011 until October 2015, compared to 1.16% for ISIL. The obsessive focus on ISIL as the main threat to women (and civilians in general) in Syria is not only inaccurate but significantly undermines the life-threatening hardships they endure from other parties to the conflict on a daily basis. Women activists in regime-controlled areas also face detention, torture, sexual abuse, enforced disappearance, and last but not least, indiscriminate shelling of civilian areas.

3) Women activists and groups in Syria are compelled to face a twofold confrontation in the conflict. What this entails is that in addition to the challenges and threats civilians and activists face in general – mainly the lack of safety, bombardment of civilian areas, indiscriminate detention, enforced disappearance and many more – women activists and groups have to confront and surmount entrenched patriarchal attitudes to pursue their activism efforts. Activists whose accounts were included in the Badael report said that the patriarchal and conventional perceptions of women as victims, dependent and child-bearing beings severely undermine women’s peace activism efforts and the latter are all too often encountered by societal stigmatisation and familial rejection.

4) Syrian women activists and groups are turning oppression into activism tools. While patriarchal attitudes and stereotypes against women constitute a significant challenge to continuing their peace activism efforts, Syrian women in the Badael report indicated that many activists are taking advantage of these preconceptions to their peacebuilding efforts’ benefit. In fact, Syrian women activists are creatively transforming the obstacles they are facing into advantageous tactics so as to remain active and influential. For instance, many Syrian female activists are using the preconceived stereotype that ‘women are innately peaceful’ in order to influence mediation processes and prevent violence in their communities. Another example is how women activists are benefitting from restrictive dress codes (niqab) in ISIS controlled areas to hide their identities and thus avoid being persecuted for the peaceful work that they do. 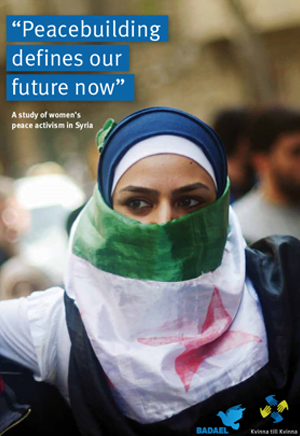 The Badael report provides a unique observation into women’s peacemaking activism efforts inside Syria. It identifies the numerous fields in which women are making a significant change, pinpoints the challenges they are enduring, and also provides recommendations for the international community and Syrian actors to build upon women’s activism.

Women’s Peacemaking Efforts in Syria: A Lead to Follow

Syrian women’s peacebuilding efforts and initiatives are not only generating peace and preventing violence at the grassroots level; in fact, they constitute substantial examples and sources to follow in designing a national plan tailored to local contexts. As such, they similarly form an opportunity for the international community to “support the birth of a stable locally pioneered future for a pluralistic equitable Syria” (Badael report).

Syrian women’s groups and activists have strong capacities to influence the peace process; in fact, WILPF strongly considers using this narrative blocks the path to inclusive peace and flagrantly excludes women by using an erroneous alibi pertaining to a lack of capacity. WILPF believes that one main way for the international community to do so is to call for and guarantee that women groups and activists are included in the peace process in a substantive manner and at all levels. This implies shifting the narrow focus on national and international formal negotiations to a broader peace-building framework that encompasses inclusive and diverse apparatuses, beyond the obsolete male-dominated processes. The change of discourse on women’s participation must be shifted from a normative “why participate?” to a practical and efficient “how to participate?” – and the Crisis Response Programme at WILPF has recently published a blog on the numerous available modalities for Syrian women groups to be included in the peace process. In addition to the international community, Syrian political bodies must ensure women groups’ participation; however, not as an attempt to please international actors’ demands, but as a genuine need to include them as influential peacebuilders without whom the peace process is not only incomplete, but also unsustainable.